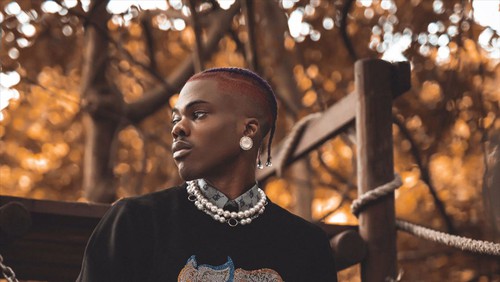 Nigerian Afrobeat singer, songwriter, and producer CKay achieved breakout success in the early part of the 2020s when his single “Love Nwantiti” became a viral hit in countries around the world. Originally released on his 2019 EP CKay the First , a remixed version featuring Joeboy and Kuami Eugene became a major hit in places like Australia, Netherlands, Norway, India , and the U.K., and even made the Billboard Hot 100 in the U.S. Additional remixes helped it become a hit in France, Germany, and Latin America. Amid this upswell of popularity, CKay released his third EP, Boyfriend, in early 2021. Born Chukwuka Ekweani in the northwestern state of Kaduna, CKay learned to play the piano from his father, who conducted the choir at their local church. After being introduced to electronic production and beatmaking, he relocated to Lagos and began releasing his own music. His smooth vocals and mix of R&B, Afrobeat, and dancehall led to a contract with influential label Chocolate City who released his debut EP, Who the Fuck Is CKay? in September 2017. The South African-influenced “Container” earned him some early attention, though it was his 2019 EP CKay the First that made him a star in Nigeria. After becoming a modest hit, the EP’s second track, “Love Nwantiti” was remixed in 2020 featuring fellow Nigerian singer Joeboy and Ghanaian highlife artist Kuami Eugene under the augmented title “Love Nwantiti (Ah Ah Ah).” In the early part of 2021, the remixed version took off, first in Nigeria, then going viral around the world, spawning additional remixes in East Africa, France, Germany, Latin America, and elsewhere. It topped the U.K. singles chart and even made it to number 80 on the Billboard Hot 100. CKay issued his third EP, Boyfriend, in 2021 and follow-up with the single “Kiss Me Like You Miss Me.” ~ Timothy Monger