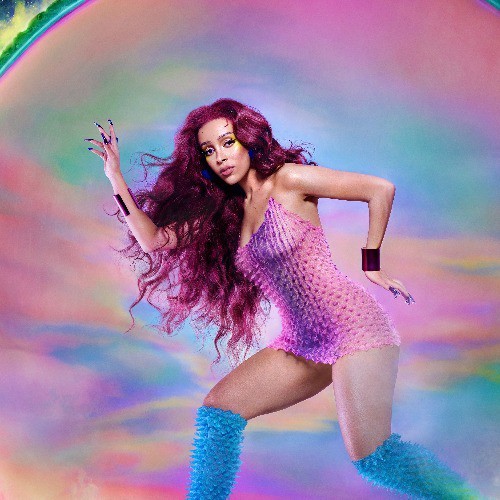 On the heels of that success, Doja Cat issued her full-length debut album, Amala, which found her expanding upon her dreamy, meme-friendly sound with more hip-hop-, pop-, and R&B-infused tracks, including “Candy” and “Roll with Us.” In 2019, she issued an expanded version of Amala that added the singles “Juicy” and “Tia Tamara,” featuring Rico Nasty . Her sophomore album, Hot Pink, was quick to follow; with features from Smino , Gucci Mane , and Tyga , the 2019 LP leaned more into the sexually wry aspects of her ever-shifting persona. A Top Ten hit on the Billboard 200, the album’s fifth single, “Say So,” pushed her even further up the charts. After making a steady rise in the Hot 100 at the start of 2020, the multi-platinum track finally hit number one in May, boosted by a Nicki Minaj remix. After picking up a couple of American Music Awards, Doja carried the momentum from her breakout year into 2021. She began appearing alongside established celebrities more frequently, adding a guest feature to Saweetie ’s single “Best Friend,” contributing to an Ariana Grande remix with Megan Thee Stallion , and releasing the SZA -assisted single “Kiss Me More.” All of this led up to the June 2021 release of her third full-length studio album, Planet Her. The record featured guest spots from Young Thug , the Weeknd , JID , and others, and its cover art was shot by photographer David LaChapelle. ~ Matt Collar….